The extensive collection of Trimble family antiques and artifacts on display in the Evergreen Farmhouse Museum speaks to the significance of the 240-year-old farm and reveals the folklife of those who lived it. The farmhouse became a museum in 1993 and is now an important part of the Evergreen Heritage Center.

View the Farmhouse Museum movie vignette HERE.  We also created a museum catalog, which can be viewed HERE.

The Evergreen Heritage Center is recognized by the Maryland Historical Trust (1976) and listed on the National Register of Historic Place  since 2015. The historical significance of the property is its role in and contribution to the successful settlement of western Allegany County beginning in the late 1700s when it was part of Washington County.

The Trimbles had migrated north from the Shenandoah Valley in the late 1700s and had settled on Federal Hill near Edward Grimes, the first owner of the land that would one day be known as Evergreen. The Trimbles acquired the Winter’s property in 1869 and re-modeled the house to create a large Victorian mansion. They also continued Federal Hill’s history of farming and participated in the region’s booming coal industry. 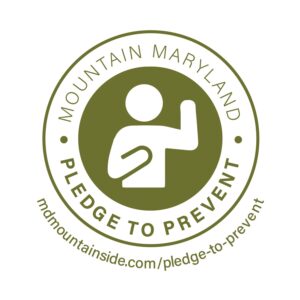 If your school is considering applying to become a Green School, please contact us or the Maryland Association for Environmental or Outdoor Education at www.maeoe.org for more information or assistance.

The Evergreen Heritage Center strives to ensure that Evergreen is accessible to the extent possible for historic sites and that its newly built facilities, including its Learning Center and multiple green restroom facilities, meet with the accessibility requirements defined by the Americans with Disabilities Act (ADA).